Note: This is the fourth post in the series: “Why Study History?”

From the threefold description of history from my previous post, the main use of history in education is in the knowledge of the past and narrations of history. That is, the means by which historians research and investigate the events of the past will not be a role in education inasmuch as this is a specialized task and so will not be a part of general education. However, this may play a role in that the historian must use reason, logic, and the rules of evidence, and these are certainly a part of the critical thinking education of the liberal arts.

The first function of history is to provide the foundations of thought. Thinking itself does not seem possible without there being something to think about. Early in the developmental process of the student’s mind, history provides the most natural and simple content for the thoughts of the student. In fact Hugh of St. Victor goes so far as to say that history is “the foundation of all knowledge, the first to be laid out in memory” (Hugh of St. Victor, “The Three Best Memory Aids for Learning History”). Hugh argues this because of the progressive nature of education, learning first that which is most immediate to the student, what is most simple, and that on which the more complex truths depend. Explains Hugh,

According to Hugh, to skip history and move to other philosophical or theological truths, or simply to train a student to perform some task, is like trying to read without first learning the alphabet. And of these people Hugh says, “knowledge of these fellows is like that of an ass. Don’t imitate persons of this kind” (Ibid). Hugh’s exhortation is based on his view that history serves to root the young student in what they can simply comprehend in order that the more complex may be developed. For example, studying the life of George Washington first, may enable the students to go on the reason about valor, courage, and war.

History provides the simplest content of thought: names, dates, events, all of which the young student can easily store in memory and then use as the content of later thought. It may not even be of immediate use to the student. No doubt, people often complain, “what is the use of studying history? I’m never going to use this!” Yet, Hugh points out that there are different kinds of utility when it comes to historical knowledge. “Some things are to be known for their own sakes, but others, although for their own sakes they do not seem worthy of our labor, nevertheless, because without them the former class of things cannot be known with complete clarity, must by no means be carelessly skipped” (Ibid).

Up next: The second function of history in education

My child, knowledge is a treasury and your heart is its strongbox. As you study all of knowledge, you store up for yourselves good treasures, immortal treasures, incorruptible treasures, which never decay nor lose the beauty of their brightness. In the treasure-house of wisdom are various sorts of wealth, and many filing-places in the store-house of your heart. … The orderly arrangement is clarity of knowledge. Dispose and separate each single thing into its own place. … Confusion is the mother of ignorance and forgetfulness, but orderly arrangement illuminates the intelligence and secures memory.

“Many are deceived by the desire to appear wise before their time. They therefore break out in a certain swollen importance and begin to simulate what they are not and to be ashamed of what they are; and they slip all the farther from wisdom in proportion as they think, not of being wise, but of being thought so. I have known many of this sort who, although they still lacked the very rudiments of learning, yet deigned to concern themselves only with the highest problems, and they supposed that they themselves were well on the road to greatness simply because they had read the writings or heard the words of great and wise men.” 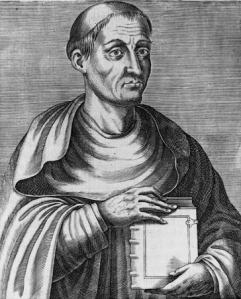